Hope you all are well and ready for some fast and furious shoot’em up action here on the Gaming on AmigaOS 4 blog. 🙂

Tonight we are going to have a look at Open Tyrian, an open-source port of the classic PC-DOS shooter Tyrian.

Tyrian was originally developed by World Tree Games Productions and published in 1995 by Epic MegaGames. The game became freeware in 2004 and the graphics were made available under an open license in 2007. The team behind it consisted of Jason Emery (coder), Daniel Cook (graphician), Alexander Brandon (musician) and Andreas Molnar (musician).

The version I’m writing about, Open Tyrian, was made possible by Mindless2112 and Syntaxglitch. It was ported to AmigaOS 4 by Varthall/Up Rough.

Ok, first things first. To get Open Tyrian working on your AmigaOS 4 setup, you need to grab the archive from OS4Depot:

Once it has finished downloading, unpack it to a directory of your choice (right-click icon, choose “extract to”). You’ll then see icons of the different versions of the game. Check out the enclosed readme-file for more information about this.

The first thing you’ll encounter when starting up is the main menu. Here you have several options. Let’s get cracking by selecting “Start New Game”.

Here you can select the type of game you want:

1 Player Full Game: This is the story mode. Includes storyline-related messages and so forth. You start off with weak weapons, but as the game progresses, you’ll collect coins to purchase upgrades in the shop.

1 Player Arcade: Here you’ll pick up weapons along the way instead of purchasing them. You can’t upgrade the ship either like in the full game.

2 Player Arcade: Same as above, but with two players.

There are also secret modes you can play, as well as mini-games inside the game itself.

Ah, here’s the shop. Here you can buy upgrades for the ship itself or new weapons. Let’s boost our stats a bit. 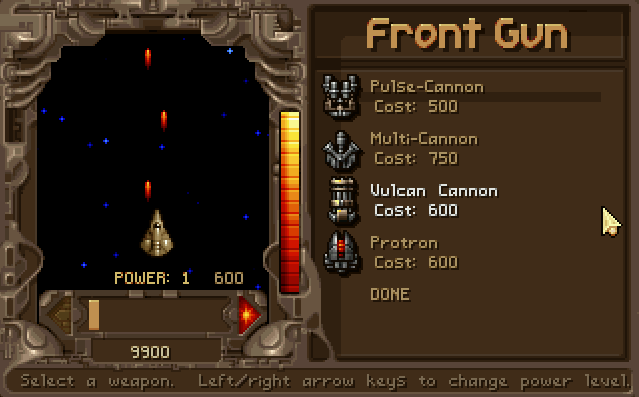 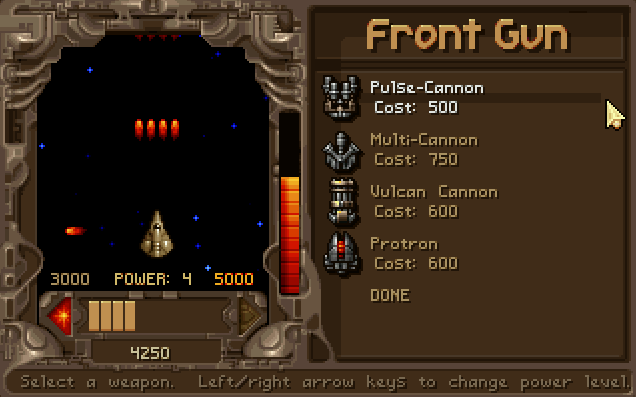 Now when we’ve finished upgrading the ship, let’s head to the battlefield.

It says “Good luck…”. Is that a good sign? Seems calm in the skies today.

Now I see why it said “Good luck…”. 🙂 Plenty of enemies trying to blow up the ship!

There are several worlds to play with different landscapes and enemies. 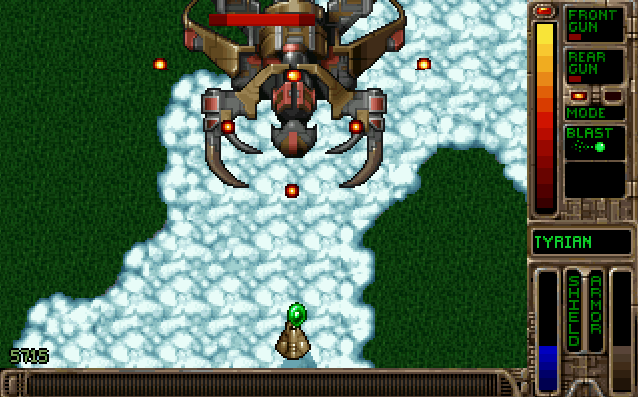 As you can see from the screenshots, Open Tyrian is a game with diverse enemies, levels, weapons and so forth. It also sports different modes of play.

While you are playing, you’ll have cool techno music pumping out your speakers, which creates a fitting atmosphere for a shoot’em up extravaganza like this. Good music in shooters is very important, as it keeps you going, even in the most difficult parts of the game. It gets you “in the mode” so to speak. There are many tunes for the different parts of the game. Great!

Graphics looks brilliant, no doubt about it. The artist must have spent a ton of time creating all the details. Impressive!

Controls are fine too. I play with the mouse and it works well. No complaints here.

So, how does it compared to the original Tyrian? I must admit that I haven’t played the first one for ages, so can’t really say for sure. What I can say though, is that I didn’t notice not playing Tyrian. That should be an answer enough. 😉

All in all, my verdict is that Open Tyrian is a super shoot’em! It is a must have on your AmigaOS 4 setup. If you haven’t played it yet, then head over to OS4Depot and download it! It’s free, it’s fun, it’s addictive! 🙂 Thanks to Varthall/Up Rough for bringing this game to AmigaOS 4!

Thanks for reading this piece about Open Tyrian. See you in another post soon! Cheers!