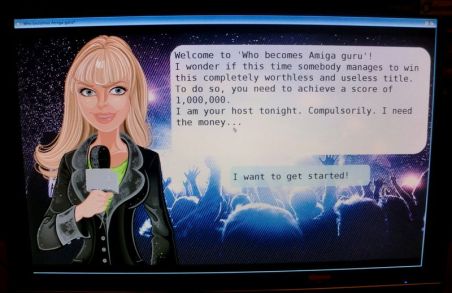 Hope you enjoyed my last post about gaming on AmigaOS 4.1, which covered the shoot’em up game Battle Squadron. If not, please have a read here. I have lots of ideas of things I want to do with this series, such as making a section with download-links and rankings of the different games. These are all just thoughts, so it’ll probably be a while before something materializes. Now, please read on for… Who Becomes Amiga Guru?

This is a small game that is based on the well known TV-show Who Wants to Be a Millionaire? Here you’ll get questions about Amiga, AmigaOS, MorphOS, AROS and more! It was developed by an Amiga user with the name Marko Drag. He previously released a puzzle game called Soko4MUI.